FOUNDING OF THE FEDERATION

The hope was expressed in the Preface to the Revised Memorandum and Articles of Association of our Federation that at some time information might become available from which our antecedents might be charted.

That day has now arrived, and I am indebted to the Glasgow United Fleshers` Society for their permission being given to the Federation for unrestricted perusal of their Minute Book 8 (26 February 1917....29 August 1923) in order that the manner of our beginnings as a Federation might be recorded.

Our Certificate of Incorporation was granted by the registrar of Companies in Edinburgh on 26 July 1918 and apart from that fact we have nothing in our records. The very first information is contained in a brief hand written Minute of the Meeting of the Executive held in Glasgow on Monday 12 November 1917. This is an extract... Page 91 " Minute of the COMMITTEE of the GLASGOW UNITED FLESHERS` SOCIETY" held within the Clerk`s Chambers, 105 St Vincent Street, Glasgow on Monday 12 November, 1917 at 8 pm

"It was resolved that a Motion be put forward to the Mass Meeting to form a FEDERATION of SCOTTISH MEAT TRADERS."

May I explain what lay behind this need to constitute a Federation which would then be a combined voice of authority representing Retailers and Wholesalers from all over Scotland in order to compel the Food Control Authority to recognise their just complaints and have these remedied. The Minute appertaining to this matter continued for several pages but was followed by:-

Page 99 " Bailie Robertson, Dundee . Then moved the following Resolution:- That in the opinion of this Mass Meeting of Scottish Meat Traders assembled in Glasgow, the time has now arrived when, in the interests of the Meat Trade, a Federation of the Meat Traders in Scotland should be formed and accordingly approves of the formation of such Federation, and resolves that steps be immediately taken to have it constituted."

"Mr James Miller seconded and after several others had spoken in favour thereof, and there being no Amendment, the Resolution was carried unanimously."

"On the Motion of Bailie Edward Watson, it was remitted to the Glasgow United Fleshers` Society to intimate the Resolution to all known Flesher Societies in Scotland, and with full powers to proceed with the formation of the Federation."

The Mass Meeting took place and the following brief comments come from the Minutes showing progress.

An analysis of letters received from various Societies regarding the proposed Scottish Federation was submitted: All of these were favourable but a number desired to have their liabilities stated before they committed themselves. It was remitted to a sub committee consisting of the President Mr W R Hunter, Ex-President, Treasurer and Messrs. John Stewart, and Robert H Brechin, to draft the proposed Constitution...The Minute recalls that there was a crowded attendance and that there were representatives from Edinburgh, Arbroath, Peterhead, Greenock, Kirkcaldy, Paisley, Coatbridge, Inverness, Dundee and elsewhere.

Apologies had been intimated from Traders in Beith, Castle Douglas, Dunblane, Laurencekirk, Stranraer and Perth .

A letter had been received from the National Federation of Meat Traders who welcomed the formation of a Scottish Federation and in reply it was said that the continuation of membership and other matters which were to the benefit of both Federations would be dealt with by the new Federation.

It was reported to the Committee Meeting that a Draft Constitution had been formulated and that printed copies would be issued to Members of the Committee. Copies would be sent also to all interested Societies and a Meeting would be held on 27 February 1918 to discuss matters.

An interested feature is recorded in this Minute where the idea of the Federation was already taking shape and where representatives as follows showed their practical uniting as one. No doubt they remembered the French proverb, that Unity was Strength, and into Action they went.

There was also a very large turnout of the Trade generally.

The Clerk, Mr Hugh Duncan, of Messrs Russell & Duncan, Writers, reported that the Board of Trade had requested additions to the proposed draft Constitution by requiring that the names of various officials be shown in the first copy, viz the First President, Vice-president, Secretary and Treasurer, and these would act till the first Annual General Meeting be held.

Mr John Stewart was elected as the first President, Vice-Presidents elected, were:-

With another to be named by the Aberdeen Society and with power to be given to the Executive to add other names in keeping with the limit set. (15).

Mr Hugh Duncan was initially appointed as Secretary and Treasurer but advised the Executive that he would rather a member of the Trade be appointed.

Mr John H Sinclair agreed to act jointly with Mr Duncan and they were accordingly appointed Secretaries and Treasurers.

Having been invited so to do, the Wholesale Meat Society put forward the name of Mr James Miller to be their nominee for the Chair in the absence of the Chairman. This was agreed.

The clerk reported that the Scottish Federation was duly registered on 26 July 1918 and an invitation had been issued to all known Societies in Scotland to become affiliated.

Minute of the Annual General Meeting of the Glasgow United Fleshers` Society held within the Trades House, Glasgow, on Monday, 14 October, 1918 at 8 pm

"The Chairman submitted a recommendation from the Committee that the expenses of the formation of the Scottish Federation, should be paid out of the Society`s Funds. It was reported that the outlays would amount to between £70 and £ 80 and that Legal expenses would be about £ 100, but that the clerk and his firm were willing to accept a restricted sum of £ 150, and, and to make no charge for his secretarial work, such work he had undertaken to perform until the First Annual General Meeting to be held on the 16th inst."

"The Scottish Federation of Meat Traders` Associations has now been Incorporated and is in operation. The affiliation of Societies throughout Scotland is evidencing that its existence is being approved and valued by the Trade generally. As the United Fleshers Society has taken a leading part in the formation of the Federation, and is the largest Society, the Committee recommend that the expenses of forming the Federation be defraying by the Society, and a recommendation to this effect will be submitted to the Meeting (as above).

It is hoped that some working arrangements will be arrived at between the Scottish Federation and the National Federation of Meat Traders whereby the two will be mutually helpful to each other". 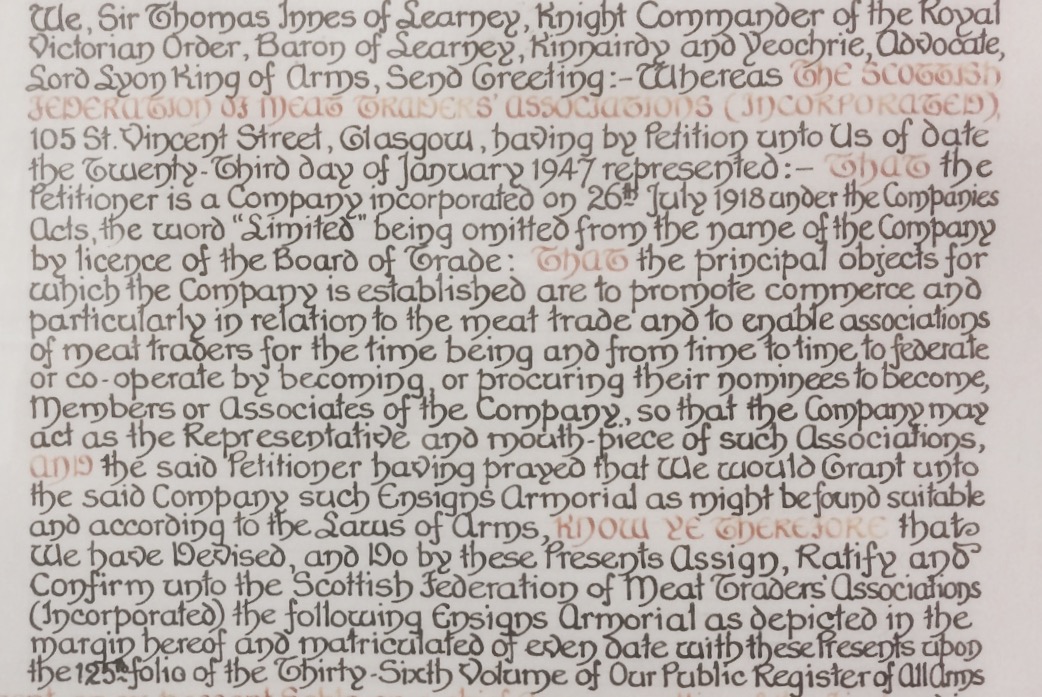 "The President reported that the Scottish Federation were endeavouring to raise a very large Defence Fund and asked the assistance of the Society in connection therewith. Mr Sinclair reported that the idea was to obtain a contribution of 6d per week from each member, until the sum of £5,000 was reached. It was moved and seconded to recommend to the Annual General Meeting that a donation of £1,000 be granted". Thus the Scottish Federation of Meat Traders` Association ( Incorporated) came into being.

Perhaps these men, with undoubted vision, may have had in their minds some words written by Tennyson, bearing in mind that they were looking along a possible dark tunnel and having suffered during a most tragic time in our history, The Great War ...1914-1918. Yet they saw a light and pressed on towards it.

"For I dipt into the future, far as human eye could see,
Saw the vision of the world that would be.
Heard the heavens filled with shouting,
And there rained a ghastly dew
From the nations` airy navies grappling in the central blue.
Till the wardrum throbb`d no longer, and the battle-flags were furled
In the Parliament of man, The Federation of the world".

This short statement was written on "All Saints Day" November 1989, a time when we seek to remember those to whom we owe so much, and humbly seek to follow into the future.

Ernie Black had run a butchers business in Dundee but when the Federation moved to Perth in the mid 1970s he became Secretary, a role he performed until he retired in April 1983. He was succeeded by Moira Brady as Secretary to the Federation.