WHY HAGGIS AND ROBERT BURNS?

He lived in various areas of Ayrshire, Edinburgh and Dumfries where he died in 1796. His experiences as a ploughman and as an exciseman inspired his poetry writing. Tam O’ Shanter, My Love is like a Red, Red Rose, A Man’s A Man For A’ That, and Ae Fond Kiss are amongst his best known works. 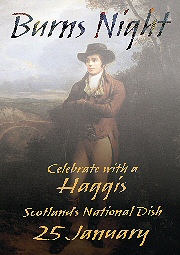 In 1785 Burns was a guest at a Haggis Club in Kilmarnock where five lawyers met for dinner. When asked to say grace he instead chose to address the haggis.

The following year the poem was completed and the ‘Address to a Haggis’ became the first Burns poem to be published in a newspaper when it appeared in the Caledonian Mercury of 20th December 1786.

On the fifth anniversary of Robert Burns’ death nine Ayrshire gentlemen sat down in Alloway to what is now regarded as the first ever Burns Supper. The assembled dined on good Scottish fayre and haggis. They recited the ‘Address to a Haggis’ and drunk several toasts.

The company agreed to meet in January of the next year to commemorate the poet’s birth and so evolved the custom of Burns Suppers held annually on 25th January.

A Burns Supper is the annual celebratory tribute to the life, works and spirit of Robert Burns can take many forms - from serious, formal gatherings to drunken ceilidhs but would not be authentic without the traditional dish of haggis.

The Supper will include an ‘Address to a Haggis’, a speech - ‘The Immortal Memory of Robert Burns, a ‘Toast to the Lassies’, a reply from the ‘Lassies’, recitations and songs of Burns. All Burns Suppers attempt to recreate the magic of Burns washed down by Scotland's national drink - whisky.

The world’s first Burns club was founded in Greenock in 1801. Hundreds of Burns clubs throughout the world annually mark the poet’s birthday.

The formal procedure for the ‘Address to a Haggis’ would be for a piper to lead the procession carrying the haggis to the dinner table. The cook would carry the haggis on a hot dish followed by the person entrusted with the recitation. After the address all three would be offered a glass of whisky and everyone would stand to toast ‘The Haggis’.

Even if you do not have a resident piper you are invited to join in this celebration. No matter how small your gathering take time to address the haggis. If you have no volunteers, pass the verse around and have everyone participate for a verse.

During the third verse, at line two the person addressing the haggis would insert a knife into the top of the haggis, breaking open the haggis and releasing the steam and ‘reek’. Scoop out the haggis and enjoy what has become Scotland’s national dish served with mashed potatoes and turnip. 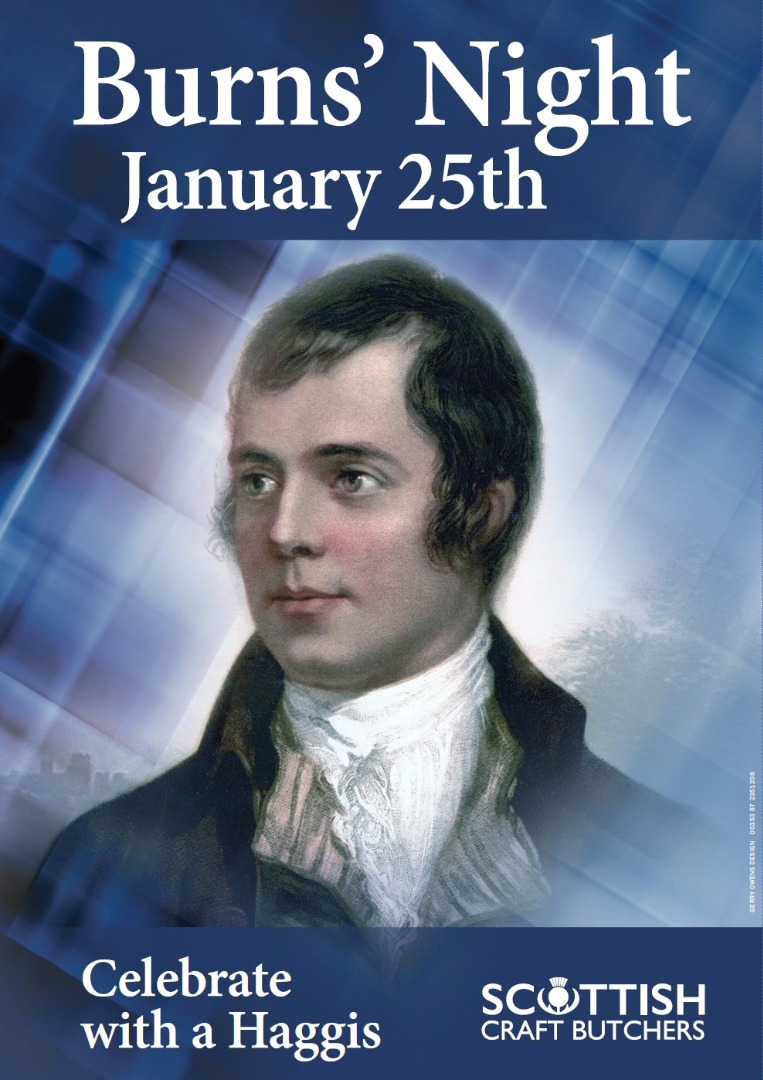