Ryan has had a steep learning curve in his journey towards SVQ level 3 (SCQF 6) and has taken it all in his stride.

Ryan displayed excellent knife skills while working towards SVQ level 2 and decided to enter the Meat Skills Competition 2017 (under 22 category) for the first time with the full backing of his employer - Allan Learmonth. Despite being nervous about competing for the first time, Ryan relied on Alan`s wealth of experience to guide him through the heat stages to reach the final which he won in May 2017. Ryan worked hard to produce the evidence for his Level 3 while at the same time planning his products and display for the final. Ryan cleverly utilised the competition display plans into his Level 3 evidence recognising that both were compatible.

After competing hard against the best young butchers in Scotland, Ryan was voted the winner of the competition. He has now been asked to be part of Team GB at the World Butchery Challenge in Belfast in March 2018. Ryan will be competing in the apprentice category against young butchers from all around the world.

Ryan has further enhanced his role in A J Learmonth Butchers in Jedburgh by adapting all the company`s HACCP paperwork to use on an iPad thus cutting out the paperwork and streamlining and improving the process. He carried out risk assessments and training assessments and confidently fed back areas for improvement to the relevant people. Ryan excelled in his evidence for improving customer service and developed standard operating procedures for weigh, wrap and label products in the shop. Displaying excellent communication skills, Ryan has worked closely with his colleagues to build a productive working environment. Ryan was part of the team who won the highest award in Scotland for Sliced Sausage becoming the Scottish Craft Butchers champion.

Ryan has worked steadily through his Level 3 producing very high quality evidence for all the projects and providing all evidence on time. He was only held up in his progress when he was rushed to hospital for an emergency appendectomy but this did not deter Ryan from working on his course while recuperating and even still sent evidence to his assessor.

Ryan has grown from strength to strength on his journey through Level 3 and has matured into a young man who is an asset to his company, a rising star in our industry and a credit to himself. 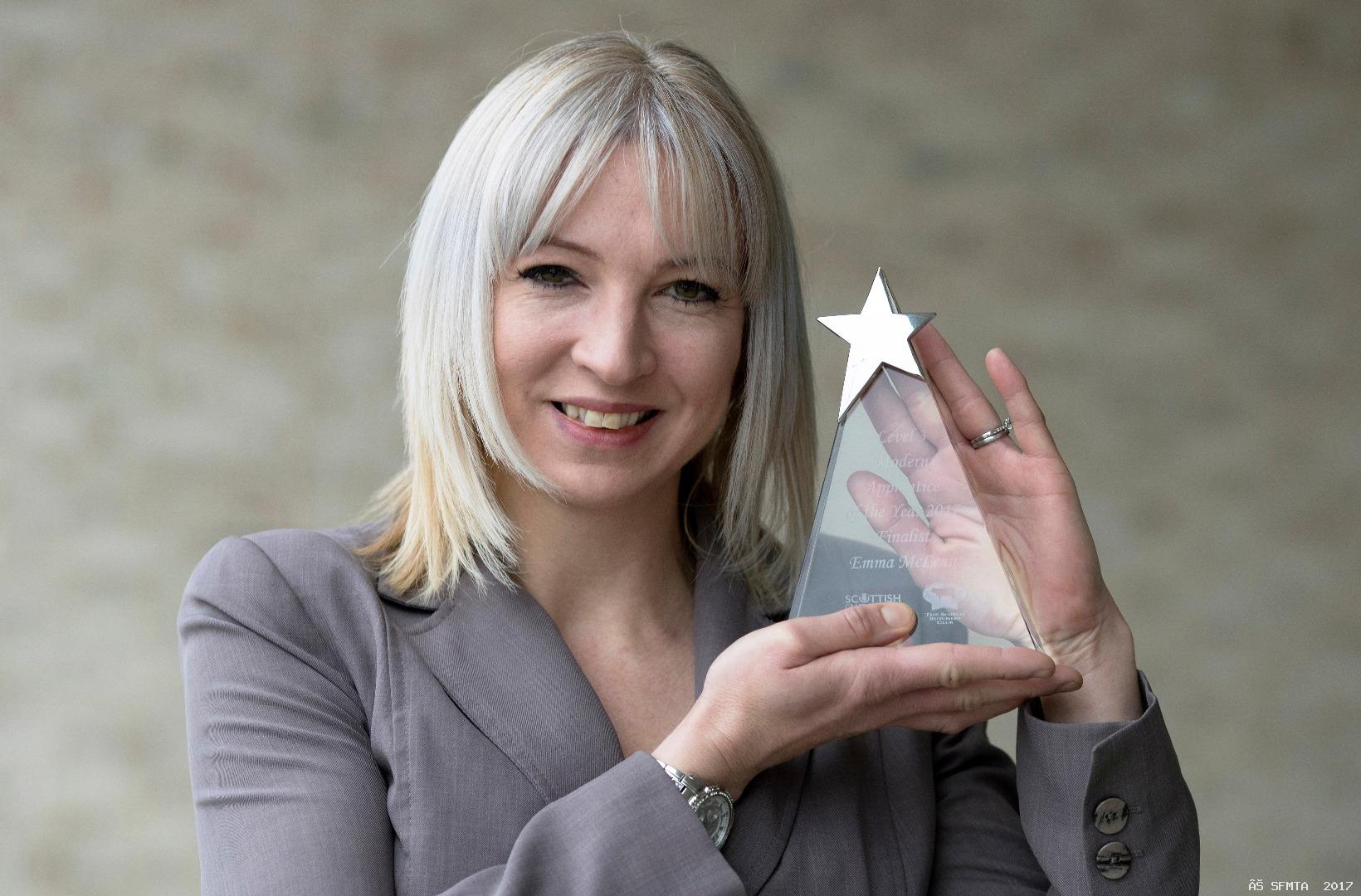 Emma started in the family business in 2014 after being made redundant from her role in recruitment consulting within the oil and gas sector. Emma`s skill set meant that she approached the business of selling meat with a completely open mind and after completing her Level 2 Customer Service qualification she was keen to progress to a Level 3. Emma`s standard of work has been very high with an analytical approach to the entire qualification. For each unit she carried out detailed research and was able to use the information gathered to make measurable improvements to the business.

For the "achieving excellence" unit, she focussed on the use by dates of high risk goods and liaised with the EHO to carry out testing to establish acceptable limits and improve food safety.
Emma also took it upon herself to carry out a revision of the HACCP system in use in the shop and incorporated into this costings for oven ready products to ensure that pricing was accurate and margins were attainable.

For the health & safety unit she researched fire extinguisher details and the current regulations so that the business could effectively comply with them and ensure hazards were correctly addressed. She also sought advice from a customer who had been in the fire service for years.

A Facebook page was introduced to the business by Emma, realising the potential that social media plays in today’s world. She updates and maintains this on a daily basis, using it to create promotions and this has been a tremendous success, attracting hordes of customers to the small Aberdeenshire town.

Emma really comes into her own when dealing with customers, whether it be on the phone, face to face or via Facebook. She has such a relaxed way of dealing with any and all situations that the customers always are always left with a smile on their face. Her communication skills are excellent and customers seek out Emma to chat to when they come to the business.

This invariably leads to Emma putting her selling skills to use and they usually leave with more than they came in for! Her manner with the staff is just as positive. If there are new products or special offers proposed then Emma always encourages all staff to become involved and values the opinions put forward by them.

The shop always has a relaxed air to it and you are guaranteed a laugh and a joke. She is always positive and enthusiastic and puts 110% into every day and everything. For someone that has come late to butchery Emma is having a very positive impact on J & G Dossett and thoroughly deserves the title of Level 3 Modern Apprentice of the Year.

I have been working with Joseph Paterson for the past year now as he works towards achieving his SVQ Level 3 Qualification.

As well as producing some fantastic work for his Modern Apprentice Qualification Joseph has been working closely with manager Amos Smith incorporating his new found knowledge into updating and creating new and existing HACCP paperwork and procedures for the business.

The level of time and effort Joseph has put into his work is truly astounding, creating standard operating procedures, display plans to maximise food sales and contributing to continuous improvement within the business. Joseph really has raised the bar in my opinion.

The content of the course work that Joseph presents for his Level 3 Modern Apprenticeship is of outstanding quality, it is well planned, well laid out and perfectly presented. At each visit I am more and more impressed with the level of detail that Joseph goes into – this course work is also integrated into the day to day running of the shop.

Joseph is a real pillar of the community, doing various charity events as a scout leader.
Joseph has taken all this in his stride as well as being a devoted family man raising three kids!

So for all of the above reasons I truly believe Joseph deserves the recognition for his hard work as Level 3 Modern Apprentice of the Year 2017.

Danielle has been a pleasure to work with from the very start owing largely to her very positive attitude to both her work at Churchill’s and her Modern Apprenticeship commitment. Indeed, the two have worked hand-in-hand as Danielle has enthusiastically and selflessly used the evidence requirements for each unit to help progress the business, not least the development and improvement of the company’s food safety management system embracing HACCP principles throughout.

With the Level 2 being largely based on skill and dexterity, the move to Level 3 can prove challenging but Danielle, despite having to negotiate the barriers presented by dyslexia, has met the challenge with great enthusiasm. The manner in which she has approached her work has clearly been noticed within the workplace as she is now in sole charge of the larder (i.e. the venison processing unit), a significant step forward and a measure of the high regard
with which she is held in the business.

Danielle is fully embedded in her work and in addition to her responsibilities described above takes a fully active part in the retail side of the business which includes the promotion and sales of product at music festivals, food “fayres” together with the on-line purchasing facility.

Danielle would be a worthy recipient of this award.