President Jamie Chapman and his father, Past President John

Ladies, gentlemen and honoured guests. Thank you very much for electing me to be your President.

It is an honour and very special to be the fourth member of the Chapman family to have this chain pinned to his jacket.

Over the past five years the presidency has been shared with Duncan doing one year, then President Mark for two years followed by Duncan again for a further two years. I now take up this position and responsibility with some trepidation, as I know the dedication and commitment that has been show over these last five years.

My first duty and privilege as President is to present Duncan with his Past President’s medal and to thank him for a job well done.
But Duncan already has a medal, so we would like to present you with something a little more practical but hopefully something you can hold with pride and empty with pleasure.

Looking back over the Minute Book it came to my attention that it is exactly thirty years since the Executive of the Scottish Federation of Meat Traders decided to employ a full time Secretary and open an office in Perth, renting premises from the MLC. The first Secretary was Mr Ernest Black and the President - Mr Andrew Murray, who sadly died this year. These two men gave this Federation a wonderful start with their unlimited enthusiasm.

Before 1976 our President and our legal officer attempted to cover everything, an impossible task. Mr Roy Baird was asked to chair a small committee to formulate a system to enable our executive to become much more efficient. Their recommendations were to form small committees with convenors so that the work load could be shared, livestock, membership and development, legislation, labour conditions, promotions and finance.

In 1971 local authorities were exempt from providing slaughtering facilities and it soon became apparent that larger abattoirs were not interested in the private butcher who had 3 or 4 cattle and 10 sheep. In many parts of Scotland small butchers could no longer buy livestock. In 1976 Wishaw abattoir was put on to the market by the local authority and our newly formed livestock committee convinced butchers to form a company and buy the premises.

With the help of auctioneers and a few farmers £84,000 was promised at the first meeting and a company was formed. In 1980 the same formula bought Borders abattoir and in 1981 St Andrews. Around the same time Jim Royan took an interest in Elgin abattoir and the Munro family kept Dingwall open and so independence was available in these areas. These were exciting times for the Scottish Federation with members supporting all these ventures.

Duringthe late 1970s with our entry into the EEC, executive members made many visits to other EEC countries including France, Belgium, Holland, Germany and Denmark. My father told me of two experiences. The first was in an abattoir in Brussels where he saw cattle handled in a manor which was made illegal in Scotland in 1938, 40 years previously. The second was more interesting.

In 1940 a shipment of Danish bacon arrived in London and was never paid for as Denmark was then over run by the German army. When the money was paid in 1946 the Danish government had no idea who to pay the money to, so with the money they built a training school for butchers. 90% practical work, but what to do with all the meat? The Danish government had the answer; the training school supplies the armed forces and also other government departments. This could be one way to ensure our armed forces ate British beef, lamb and pork.

In 1978 our first hand book was produced by Aberdeen and Northern Press, nothing like our handbook of today but it was a start. Secretary Ernest Black, who had been producing a news letter for the Dundee association, started a newsletter to all members from the executive and again it was a start to what would become very professional newsletter that we get today, for which Douglas is due great credit.

In 1981 my father accepted the presidency on the understanding that it was reduced to a one year term. He felt that certain good men and executive stalwarts were not given the opportunity to be president. He fondly remembers Bob Alexander (Port Glasgow), David Faulds (Kilmarnock), Roy Baird (Bathgate), Arthur Mathews (Dundee), and there were other as well who never missed an executive meeting. In 1976 there were about 800 members, today just fewer than 400 so now we are back to a two year term in office for the President.

I am certain that our executive members today have decisions to take and many things to question just as the executive had all those 25-30 years ago. It is our responsibility to carry out this function to protect the future of all our members businesses.

Our auctioneering friends are only to aware that following the foot and mouth scare it is doubtful if the sale of fat stock at auction would have survived if our private abattoirs with butchers and the wholesalers who operate from them had not given them tremendous support.

I have no doubts that there were sections of the meat industry in Scotland who were against the restart of auction sales. Regardless of the percentage of fat stock sold this way it gives farmers an alternative and also a guide price. Maybe looking at the dairy farmer’s situation today will keep their minds focussed.

The 30 month rule which saw thousands of tons of quality clean beef destroyed was a disaster. Mr John Thomson in his book about the history of livestock auctioneering claims that it was a decision by a civil servant, late of an evening, without any justification.

We now have a 24 month rule still with no justification other than to allow the export market to reopen. The retail section will carry the brunt of the cost of this decision in additional costs due to the removal and staining of bones. It could also encourage farmers to market cattle under 24 months old even when another two or three months feeding would have improved the quality of the animal.

The removal of SRM and other material from our smaller abattoirs is being unfairly overcharged by the renderers in Scotland who have no opposition. An appeal to SEERAD and the Office of Fair Trading was just a waste of time. They do not appear to have any interest in the private retail trade.

Our relationship with QMS has improved considerably lately and I would like to thank Andy McGowan for his effort on this front. He has put in a lot of work with the independent abattoirs to include them and the butchers who the kill for within the scheme. Also June Lomax who has worked hard with Douglas and the promotions committee to help sponsor various competitions and campaigns.

I hope that the extremely impressive butchers display at the Royal Highland Show, on the QMS stand will be given greater prominence at the busier times next year so as to attract a larger audience. Perhaps QMS will have a stand at our own trade fair to be held in Perth on Sunday 13th May.

Talking about dates and QMS, I hope that we will soon be able to put forward at least one nomination to the QMS board.

Why was our representative to the board and that of the auctioneers forced off the board?

Why, when a butcher was invited onto the board was he forced to sign a confidentiality clause stopping him reporting back to the executive?

These are supposed to be times of more open governments. I have never had an answer as to how the levy money from cattle that fall out with the PGI is spent. I wonder what this figure is and how it is allocated. I have seen no promotion of non Scotch beef. SFMTA play a major role providing a very high standard of training through out Scotland and hopefully into expanding markets. Scottish butchers are the best supporters of Scotch beef, Scottish farmers and auction markets. Yet SEERAD did not see fit to include the Scottish Federation in the initial set up of QMS. I don’t know if they are aware of the professionalism of SFMTA or the fact that we have nine staff.

We must look to the future with the hope that we will have at least one board representative.

There are those who are pushing for cow beef to be included within the PGI and to carry the Scotch mark. I must remind those involved with QMS that the Q stands for Quality and not quantity, regardless of the extra income that the levy money would bring. That any decisions on how to handle this manufacturing beef must be industry driven and not be political.

When my father made his Presidential Address on 25th October 1981 he said that “the Federation must continue to be represented at levels where decisions were made which could eventually affect the retail sector”.

As I have just said I feel that at least in the case of QMS we are on the brink of getting our rightful representation but another place where we feel aggrieved by the overlooking of independent butchers is with Improve, the Sector Skills Council for the Food and Drink Industry.

Improve have managed to issue numerous reports towards the formulation of a Sector Skills Agreement for the Food and Drink Industry while totally ignoring the entire UK retail meat trade. This cannot continue and Scottish Meat Training (SMT) will continue to bombard Improve with demands for inclusion until our voice is heard.

In SMT we have a very credible and professional training department that delivers qualifications of value. Qualifications that reward employees and allow employers to reap the rewards of their investment as well.

Federation membership too, offers great value for money to our members. There is access to a health and safety advisor John Gunster, access to an employment law advisor Gordon Kerr Smith. We have special deals for members on insurance, AA membership and Credit Cards. The monthly newsletter keeps members up to date with legislation and new rules as well as what is happening and what events are on the horizon.

The regional meetings provide a good meeting place for members and a chance to see and try new products and new techniques. Douglas and his team have transformed these meetings and with support for ESF funding and help from QMS they are not to be missed. Our product evaluations and product competitions are proving very popular. Those achieving award and winning are gaining good press which helps boost sales and raise the profile of those involved.

I know that I will have first class back up in my duties from Douglas and his staff. I don’t think we will ever have been so well served.

When my father encouraged me to attend our executive I asked why. I can only repeat what his father said to him was his reply. It is your duty, if you have the attitude, to serve your fellow butchers.

The Scottish Federation is here to serve the whole industry but particularly the smaller businesses. I hope I can do just that. 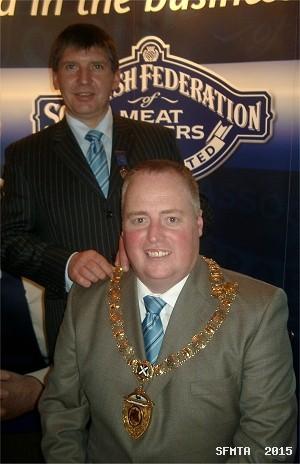 Past President Duncan Mackenzie is right behind the new President