The Steak Pie from Langholm butcher W & W Middlemass has been judged the best in Scotland. Following an evaluation of 150 butchers' steak pies in February regional winners were chosen in North, East, West, Central, South East and South West Scotland. These awards were presented in March but unknown to the six recipients their steak pies were purchased by a mystery shopper on Thursday 4th April and re-judged by one of Scotlands leading restaurateurs. 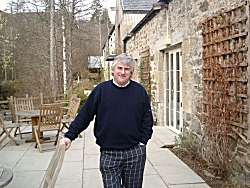 The six pies were whisked off to David Young who runs The Cross at Kingussie, described as a restaurant with rooms. David a restaurant inspector with AA for 18 years, the final seven as Chief Hotel and Restaurant Inspector tested the six steak pies and declared that the one from Langholm was the best.

David was most impressed with the Middlemass pie.

"It stood out over the rest. The meat was so tender and it was generously filled. There was a depth of flavour to the meat and gravy which itself was particularly meaty. There was plenty of pastry as well and as a consumer I would be saying; one it was a nice pie, and two it was extremely good value for money."

W & W Middlemass is owned and run by Kevin Smith and his staff of two. Kevin has worked in the business for 19 years, owning it for the last 8? years. He was delighted to come out on top:

"When I make the pies I make them like I would have myself."

Kevin Smith was presented with the Scottish Trophy on Tuesday 8th April by David Sword of sponsors, William Sword Ltd.