Islay butcher, Billy McFarlane has been elected SFMTA President for 2010-12. Outgoing President Stuart Christie from Hardgate in Dunbartonshire said in nominating his successor:-
"I am delighted that Billy has agreed to follow me in the role as President". 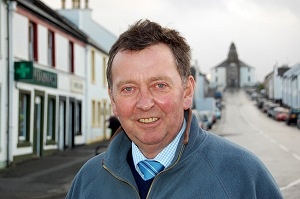 Billy McFarlane was born in Glasgow to Scottish parents who had actually met in the USA while his father worked for Ford in Detroit. He was brought up in Clynder and even while at Primary School, Billy would do jobs tidying up and odd jobs at Jack Muir’s butchers shop there.

On leaving school at the age of 15 he worked for 14 weeks at Silvers of Rosneath who make Cabin Cruisers while waiting to start his apprenticeship at Ian Martin the butcher in Kilcreggan.

While working there he met his wife Margaret and in 1971 they were married.Not long after Billy and Margaret moved to Stornoway where Billy was to become Assistant Manager in Liptons. 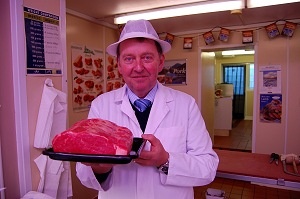 Three years later the couple enticed by a £5 increase in salary, island hopped to Islay , where Billy worked as a butcher / killer at Donald Bell’s shop in Ballygrant.

At that time Billy and Margaret thought they might be in Islay for a couple of years but 36 years later they are now well and truly settled in.

Donald Bell converted a house in Bowmore’s main thoroughfare into a butchers shop and Billy was called upon to run that but when that was sold to Gilbert McTaggart in November 1996 this was a catalyst for Billy to branch out on his own. 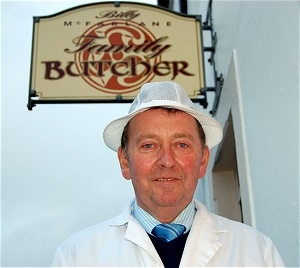 Always harbouring a desire to be his own boss, Billy duly acquired his own shop on 31st March 1998. A brave move to buy the business of Mrs Gibson, given the problems of that era with BSE, Ecoli O157 and FMD.

Things worked out well for Billy with turnover increasing five fold within a year. Now Billy has two staff; Richard and Donald with Margaret as she terms in “in the background”. As well as the shop Billy has a well kitted out separate plant where he can bone and prepare meat for the shop and where he has an exemplary set up for a separate steak pie production.

Billy makes the weekly trip to Glasgow where he picks up Fruit and Veg at the market, chicken at the Fish Market and his meat from John Scott in Paisley. Of late of course he has also made the monthly trip to Perth to play his part on the Federation Executive.