Scotland’s champion butchers prove a cut above the rest 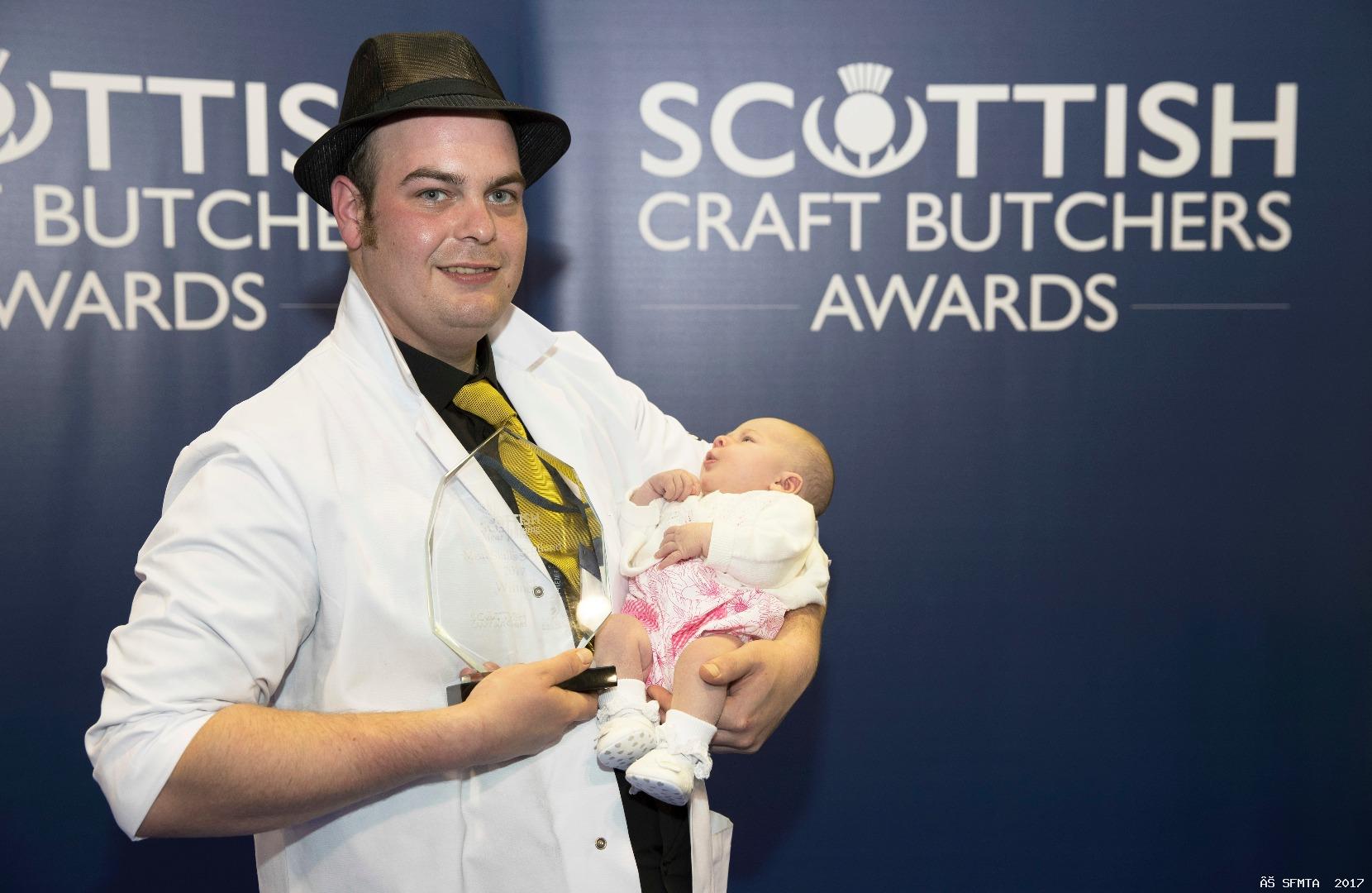 Four weeks after delivering his baby daughter on the bathroom floor of the family home, Fife butcher Jamie Syme was handed another “treasure” when he lifted the Scottish “Butcher Of The Year” title at the weekend.

The 27-year-old from Alex Mitchell Butchers in Glenrothes faced disappointment in two previous finals before securing the 2017 title in the Scottish Meat Training Meat Skills Competition at Perth.
And the newly crowned Scottish Champion immediately dedicated his hard-fought win to his baby daughter Grace. And he told how her sudden arrival called for a whole different skills set.

“This was our first baby and my fiancée Chelsea and I didn’t really know what to expect,” he explained. “She was worn out as the baby was eight days late so went for a warm bath to ease the aches.

“She said she was a bit uncomfortable but there were no really bad labour pains. She was climbing out of the bath when she felt the baby move and I just had time to lay towels on the floor and call 999 before – two pushes and 20 seconds later – Grace arrived and started crying.” 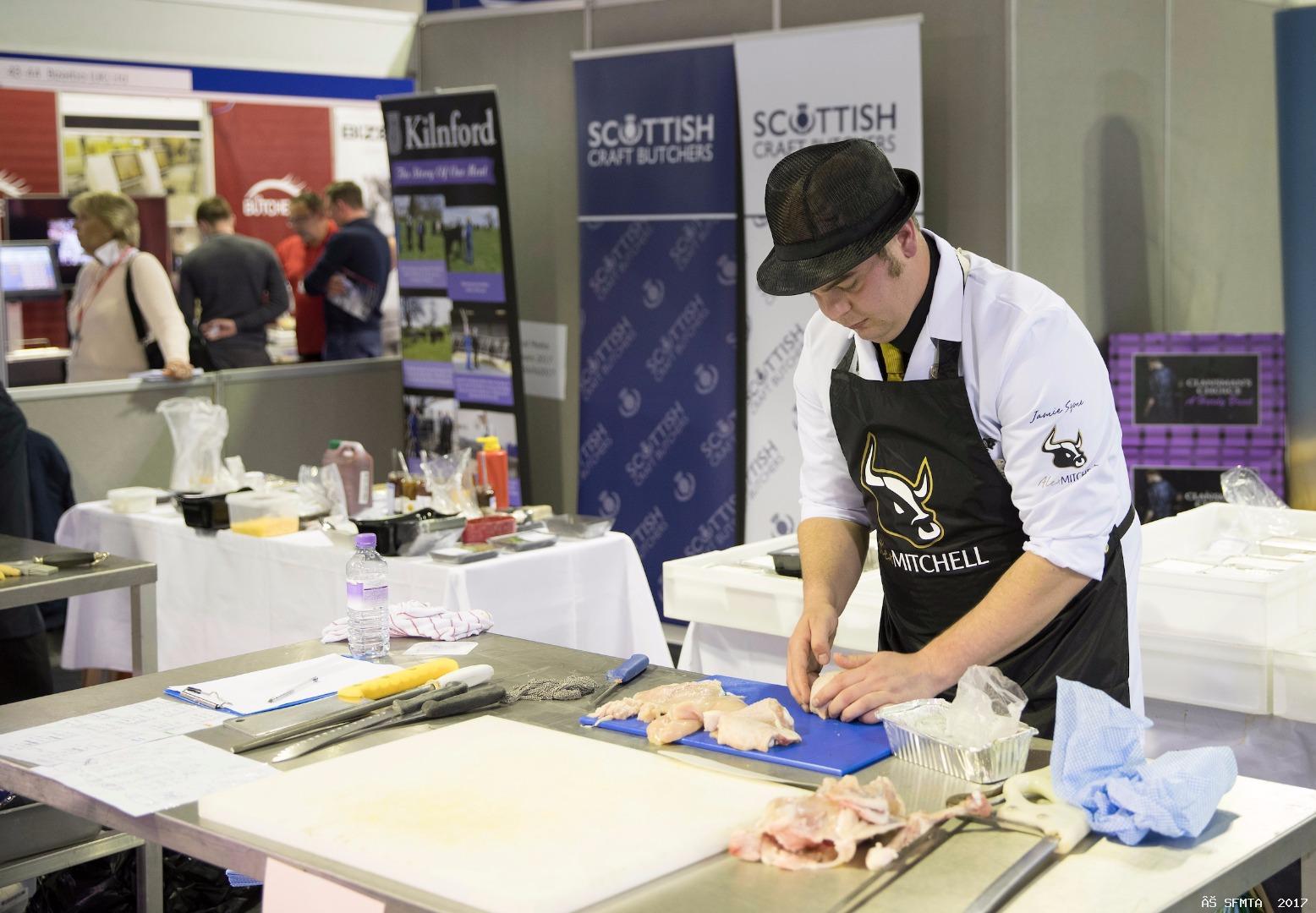 The ambulance controller talked Jamie through what to do until paramedics arrived and his fiancée and daughter were transferred to hospital where they were both pronounced fit and healthy.

Jamie managed to keep a cool head throughout the drama but admits he was shaking afterwards.
And he reckons it was coping with his daughter’s unexpected arrival that helped him keep calm throughout the weekend competition.

“After that – everything else seems a lot less stressful,” he said, “becoming a father is something that can’t be topped but winning this title comes close,” said a thrilled Jamie. “This is the biggest butcher title you can win in Scotland and it means everything to me. I’m absolutely delighted.” 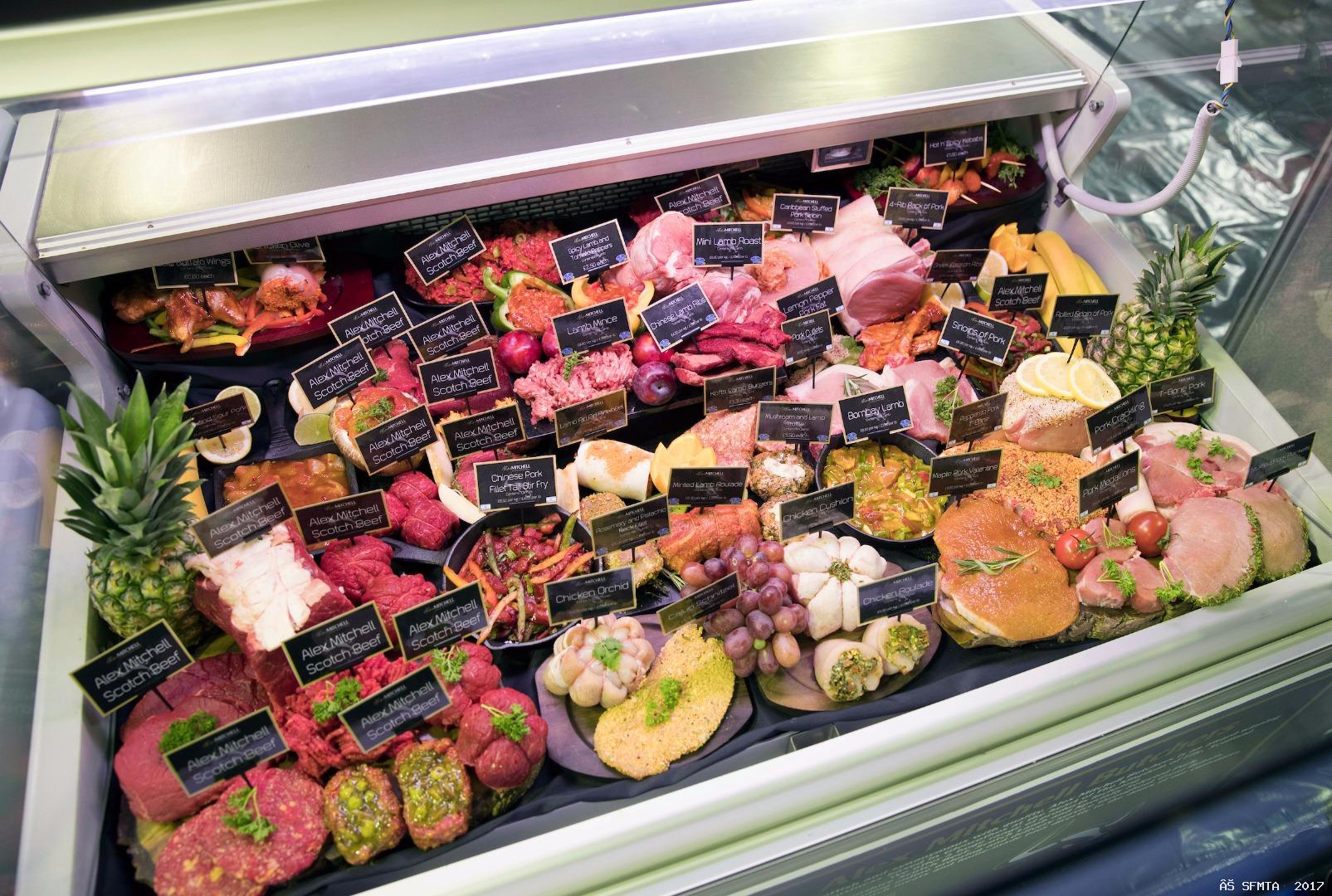 Butchers from across Scotland vied for the much sought after title with four finalists going head-to-head at the weekend in a series of demanding skills assessments.

Jamie has worked in the meat industry since he was 13-years-old, starting as a weekend dishwasher at Alex Mitchell’s before taking up an apprenticeship there when he left school.

“Being a butcher was all I’ve ever wanted to do,” he said. “I love the buzz of the shop, the chat with the customers, working with great meat and developing new products.

“I’m over the moon to win this title as I wanted to give something back to my boss Alex for all he’s done for me. I’m the last apprentice he will ever take on and winning the Scottish Butcher Of The Year title shows ‘the boy done good’.” 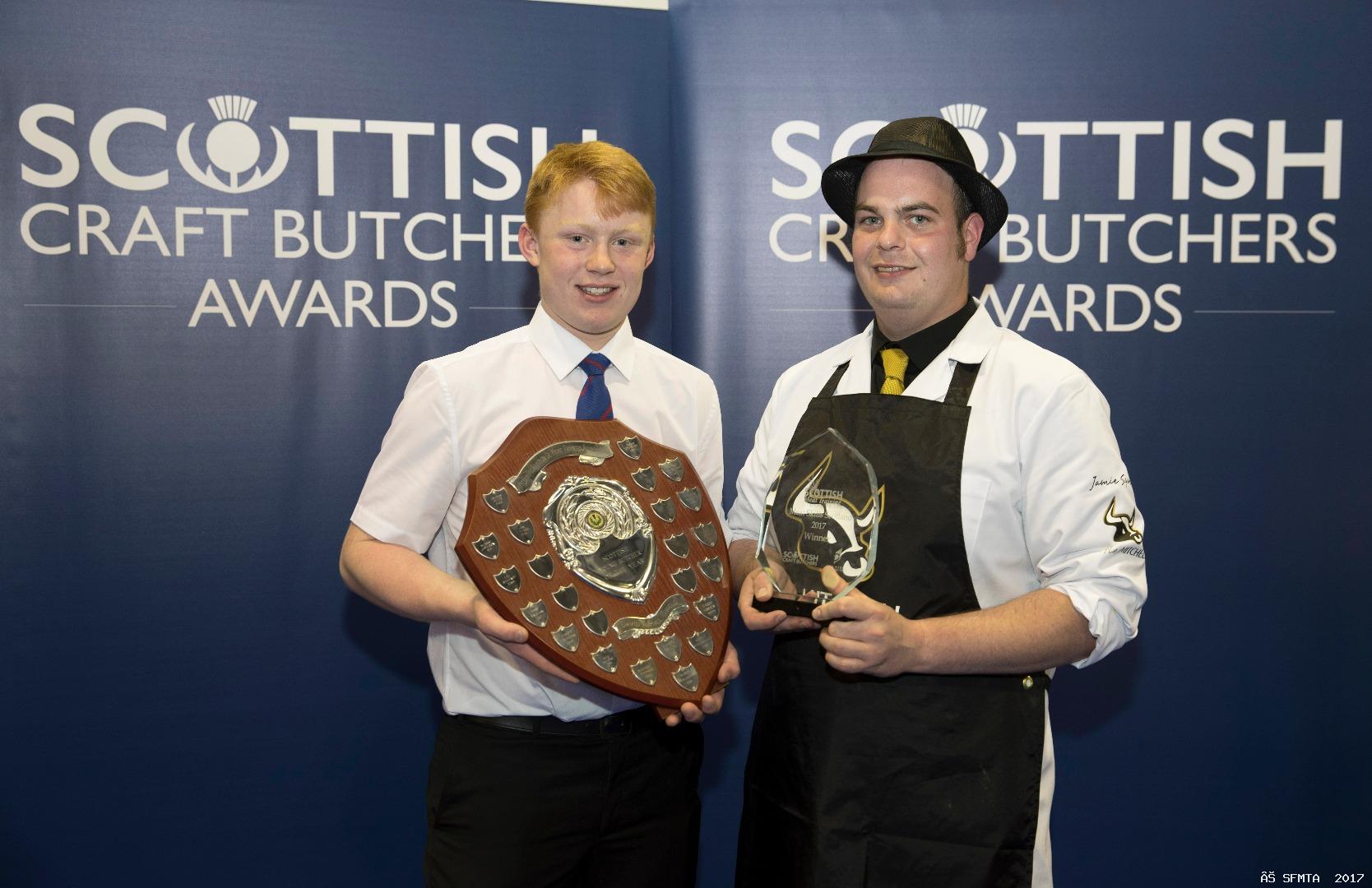 It was also smiles all round for Jedburgh teenager Ryan Briggs who lifted the Under-22 title of Scotland’s Young Butcher Of The Year.

Ryan (18), the youngest in the meat skills competition, fought off three other finalists to win the judges’ favour.

“This is just amazing,” he said. “I’m absolutely blown away to win this. This is the life I want and winning this title at 18 is a brilliant boost for me.”
Ryan has worked with A J Learmonth Butchers in Jedburgh High Street since leaving school two years ago.

“My Dad was a butcher to trade and has always encouraged me to follow in his footsteps,” said Ryan. “This win will make him so proud.” 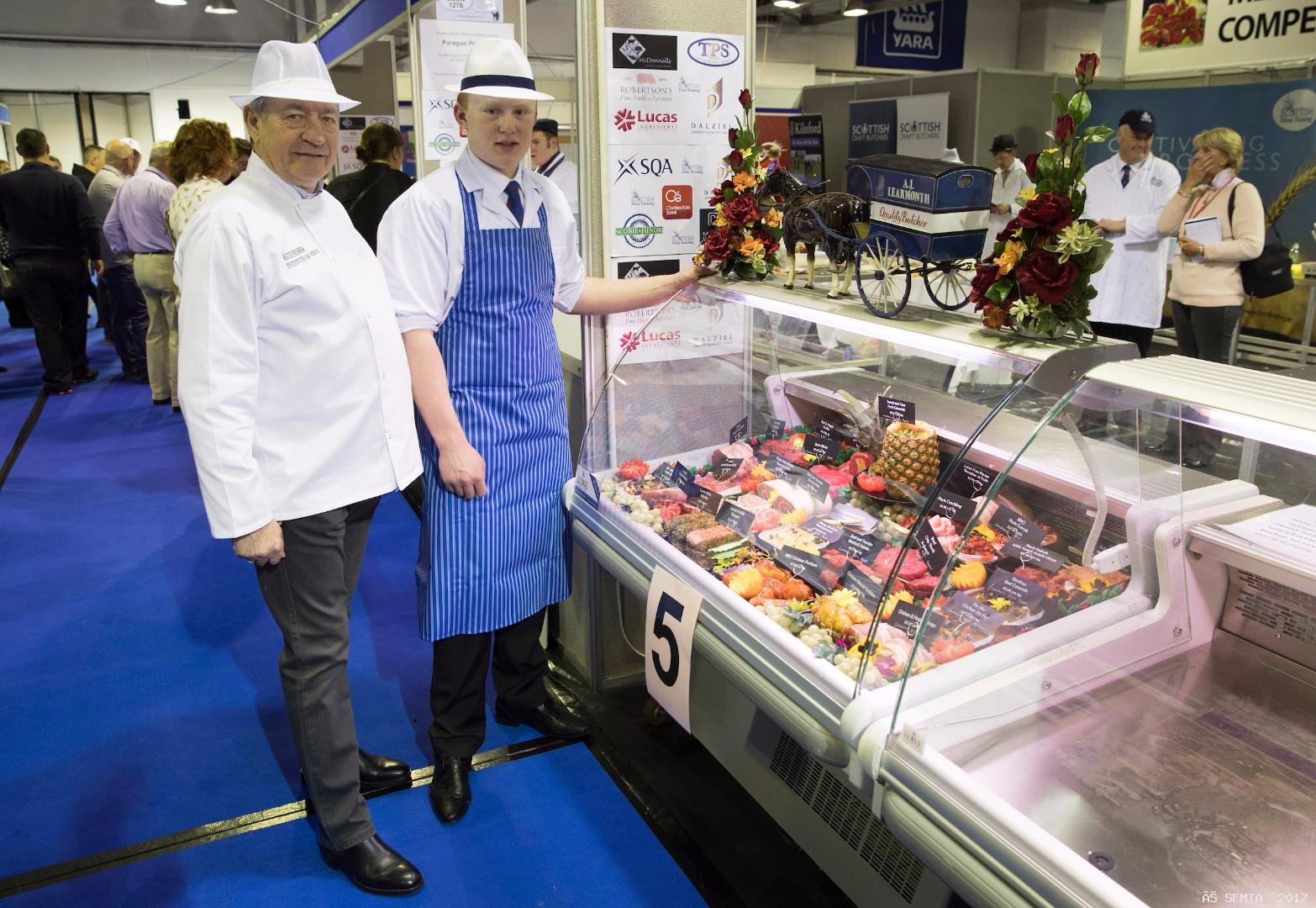 Pictured above with Ryan, event head judge Keith Fisher – one of the most experienced meat skills judges in the world and CEO of the Institute of Meat – said the two winners displayed “outstanding” skills.

“Every year the standard gets higher,” he said. “I know the industry in Scotland is in safe hands when I witness the skills shown by these butchers.

“Their enthusiasm, skill and passion shines through in all they do and both our young and senior champions are more than deserving of their titles. They are shining examples of the extremely high standard of butcher we enjoy in Scotland.”

The Meat Skills Competition, sponsored by Dalziel Ltd, was held as a showcase event at the Scottish Meat Trade Fair at Dewars Centre, Perth, which attracted hundreds of butchers, associated traders and spectators from all across Scotland.