SAUSAGE STICKS OUT IN CONTEST 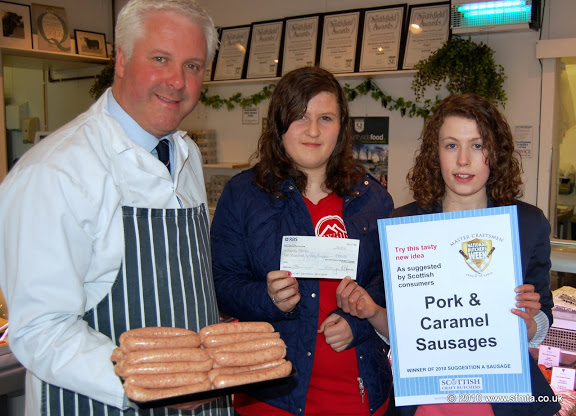 In November last year consumers were invited to suggest a sausage that Scottish Craft Butchers might develop into a saleable product. Entry forms were filled in butchers shops up and down the country and many zany ideas were dreamt up. From those 20 were selected as ideas that were original and could possibly make an interesting sausage.

Butchers tried out the ideas and those who thought they had struck on a winning recipe submitted their ‘inventions’ for judgment on Friday 12th February. A panel of sausage lovers evaluated fourteen different varieties represented by 30 separate entries on the way to selecting the best. The winning idea turned out to be the most unlikely combination of pork and caramel. Many of the judges doubted the product would be in contention but every one of them when they tasted it, was impressed with the submission.

Craft Butchers Chief Executive Douglas Scott said:-
“The addition of caramel in the pork sausages is certainly intriguing and the desire to taste will attract sales. When the customers taste the product we are convinced that they will be as pleasantly surprised as all our judges were.”As well as the four Scottish Craft Butchers in England there are 450 Scottish Craft Butchers shops throughout Scotland where these Pork and Caramel Sausages can be purchased. Your nearest can be a href="http://www.craftbutchers.co.uk/butchers">www.craftbutchers.co.uk/butchers