At an anniversary lunch held in Edinburgh on Thursday 19th May, John A Thomson proposed the toast to the 90 years of the Institute of Auctioneers and Appraisers. Having himself, one year seniority on the Institute, he congratulated IAAS on 90 years of "good work both for the profession and for farming as a whole."

Observing that the auctioneers work on behalf of farming is not as widely recognised as it should be, he added:-

"You are of course, mere youngsters when compared to me but you have achieved much in your time. I think it must have been in my blood to take up this occupation because I recall my mother telling me that among my first words when my father came home at night were 'good trade, good trade?' and my father always used to reply 'not bad'. My mother feared the very worse that I would turn out to be another auctioneer in the family.

"I would take this opportunity to say that there is nothing better than going to the mart. I would recommend regular visits to the mart for all the farmers of Scotland where they will learn a lot and profit a lot.

"It is not as easy as it used to be to get to the mart for 200 marts have closed in Scotland in the last 100 years. But I can assure my farming friends that the extra miles are well worthwhile.

"Before my time the Scottish Livestock, Auctioneers and Salesman Association was founded in 1917 under the chairmanship of Lovat Fraser of Perth. Lloyd George's government set up the association up to deal exclusively with the rationing of meat."

The old wartime association was converted into the Institute in 1926. Recalling a succession of very able presidents in the auctioneers history, James highlighted Willie Bosomworth, David Hutchison (John Swans) and Bertie Anderson (Aberdeen).

John's father was President of the Institute in 1937 and served on the War Committee in London preparing the rationing system. Some years later, James followed in the Presidents office. He remembered the 'King of the Pig trade' Bertie Bryden and George McCallum.

When John retired he felt that a written record of the Scottish auctioneering profession was needed. He wrote a book called Ring of Memories but closed short of selling the remaining 20 books at the lunch, saying 'before I get into trouble for being on the outlook for a bit of honest business."

John praised President Willie McCulloch (Lawrie and Symington) for all his work for the Institute and for continuing for a third term in office. "Having reached our 90th anniversary much changed but in extremely good heart, ready to lead this essential part of agriculture through these difficult times on to our centenary in ten years time." 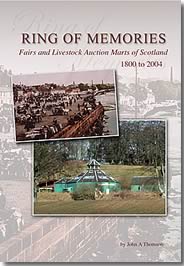