Nicola has had a difficult journey into the meat industry, she was made redundant from her first position while working towards SVQ level 2. After securing a position with another company she learned the skills required to process mainly venison and this allowed Nicola to complete her SVQ level 2.

This company moved location further away from her home but this did not deter Nicola.
Eventually Nicola secured a position with Falleninch Farm Butchers where she progressed on to SVQ level 3 with the full support of her employers.

Nicola excelled at level 3, despite being dyslexic, but found the use of the "learning assistant" on-line portfolio to be invaluable to her progress.

Nicola`s enthusiasm for level 3 and her ability to take responsibility for her own development allowed her to produce excellent evidence for her portfolio.

Nicola particularly excelled with the evidence for unit 3065 where she utilised the use of "process flow diagrams", "spaghetti mapping" and identifying the wastes within processes.

Once completed SVQ level 3, Nicola made no hesitation in asking her employer if she could work towards the Federation Diploma and this has been agreed to start after the festive period.

Nicola has many interests outside work most notably being an adventure scout leader. Nicola is also working on her biggest project so far, planning her wedding next summer. 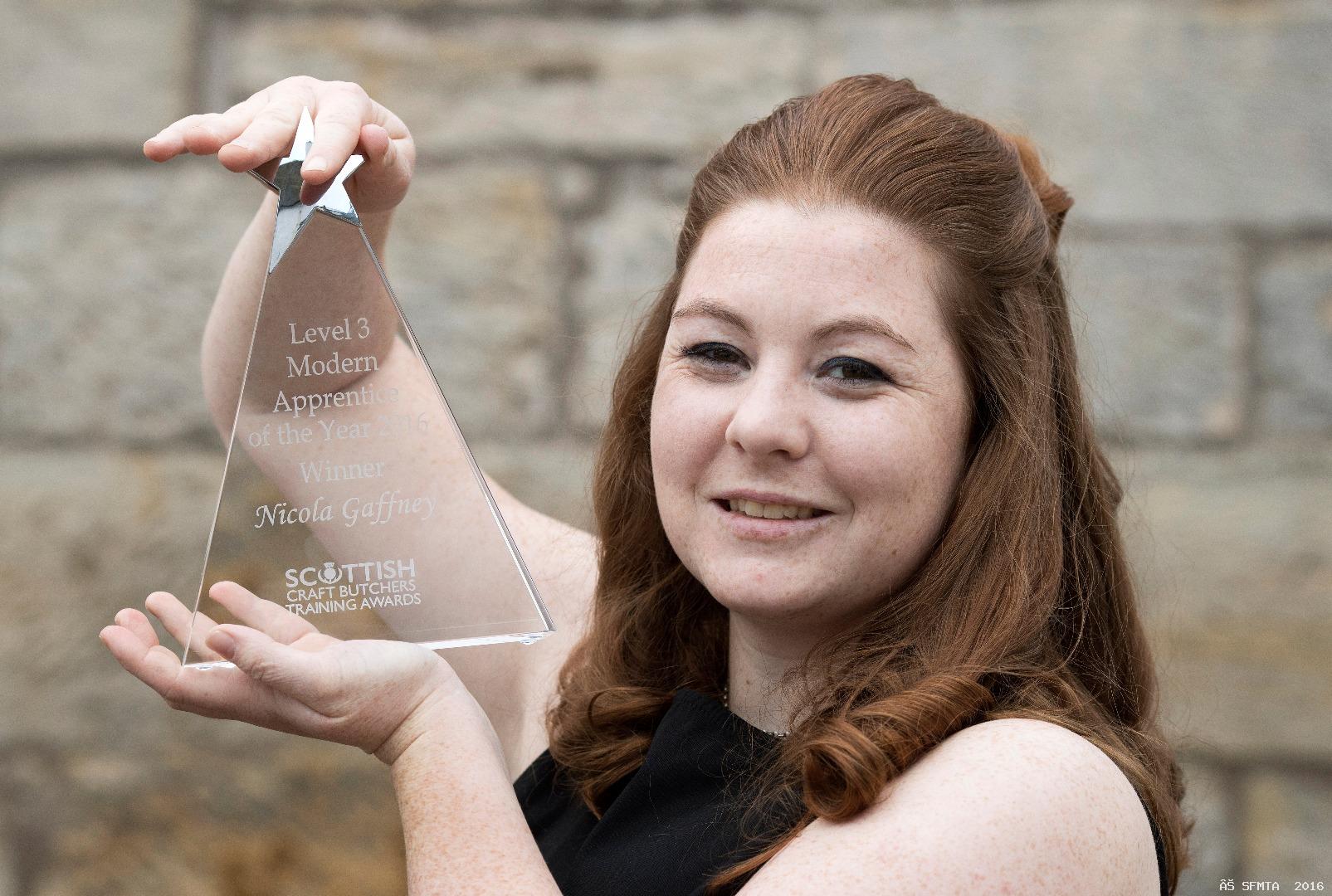 
Robbie has been involved with the Army cadets since he was 12. A career in the forces was in the offing but a Saturday job in Charles MacLeod butchers somewhat hijacked that idea.

Great commitment was demonstrated by Robbie completing his Level 2 MA in short order. He always has an "old head on young shoulders" attitude and his maturity has shone through at all stages of his training.

After completing his L2 Robbie quickly despatched his Craftsman Certificate and then moved onto his L3. This was at a time of expansion for the business as they were creating a large extension solely to manufacture their famous black pudding. This gave Robbie the opportunity to redesign the butchery production area and maximise the space they now have at their disposal.

Robbie worked with management during this process to change and change again the area until it was an efficient space. He also developed new procedures to maximise product safety and efficiency in the work area.

His Level 3 MA was completed in short order and he has actually just completed his Federation Diploma to cap it all off.

He works with a smile on his face and is always available to help out any of the staff on the premises. A true all rounder.
Nominated by John Farquhar

Unfortunately Robbie couldn’t attend the Awards ceremony as he was taking part in a charity skydive. This was the email received from his employer explaining why he couldn’t attend.

“Robbie has received his letter regarding his nomination for the Scottish Craft Butcher Training Awards, thank you very much for this, we are all delighted and very proud that he has been nominated! Unfortunately Robbie is going to be taking part in a charity skydive on the day of the awards ceremony, and sadly will not be able to attend. He is really disappointed that he won’t be able to make it along, but they are skydiving to raise funds for Arthritis Research UK, as both his younger sister and girlfriend suffer from Arthritis.” Rona MacLeod