2015 SCOTTISH BUTCHERS SHOP OF THE YEAR

Paul and Christine Boyle were at the Aspire in Leeds to receive the trophy from Graeme Sharp from the Scotch Butchers Club.

After previous attempts at the title, Paul said "I thought this day would never ever come". He went on to praise both his staff and customers for taking him to the most coveted title in the Scottish retail meat trade.

"Our shop is on the centre of a housing estate and you would never think that prizes like this would come to,a housing estate. It just shows that our hard work over the years has paid off."

Speaking at Leeds full of the elation of his newly crowned success Paul continued:-

"People have been so good, supported us and pushed us on. I really never thought that it come to the stage where we could be contenders for it, never mind anything else. The fact that we are here now and the fact that we have won it really we will now have to concentrate on putting it to good use. I am absolutely delighted and it shows that perseverance and hard word have paid off in the end." 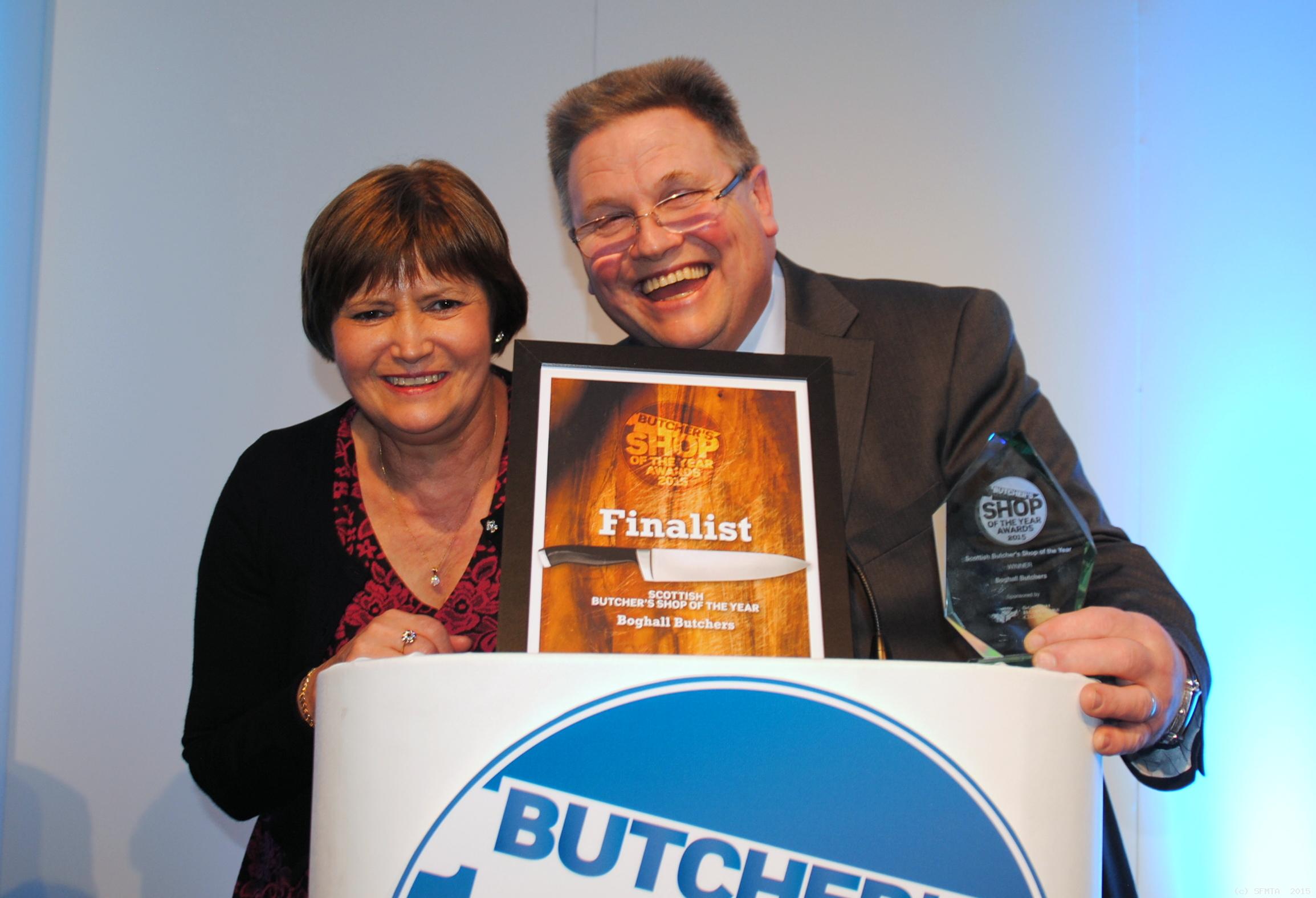 The Butchers Shop of the Year Awards promote, reward and help foster excellence among butchers across the UK. Introducing the awards Rod Addy, Editor of the Meat Trades Journal said:-

“Judging these awards has really opened my eyes to the talent, creativity and determination of effort that play an essential part in this dynamic sector. It has been a privilege to meet butchers in posh villages, middle class suburban towns and bustling rough and ready urban thoroughfares. A great deal of you are either diversifying offers in existing stores or opening multiple outlets. Let no one say that independent can’t thrive in any environment.

“Speaking to many of the entrants also swiftly debunked the myth that supermarkets opening in their vicinity spell their doom. Again and again you reported that your businesses actually benefited from increased footfall and sales.”

With Paul and Christine in Leeds knowing that they were one of three finalists for Scottish Butchers Shop of the Year the suspense waiting for the announcement was painful for daughter Mariesha and the staff back in Bathgate. Customers too were dropping in to hear if there was any news for south of the border. 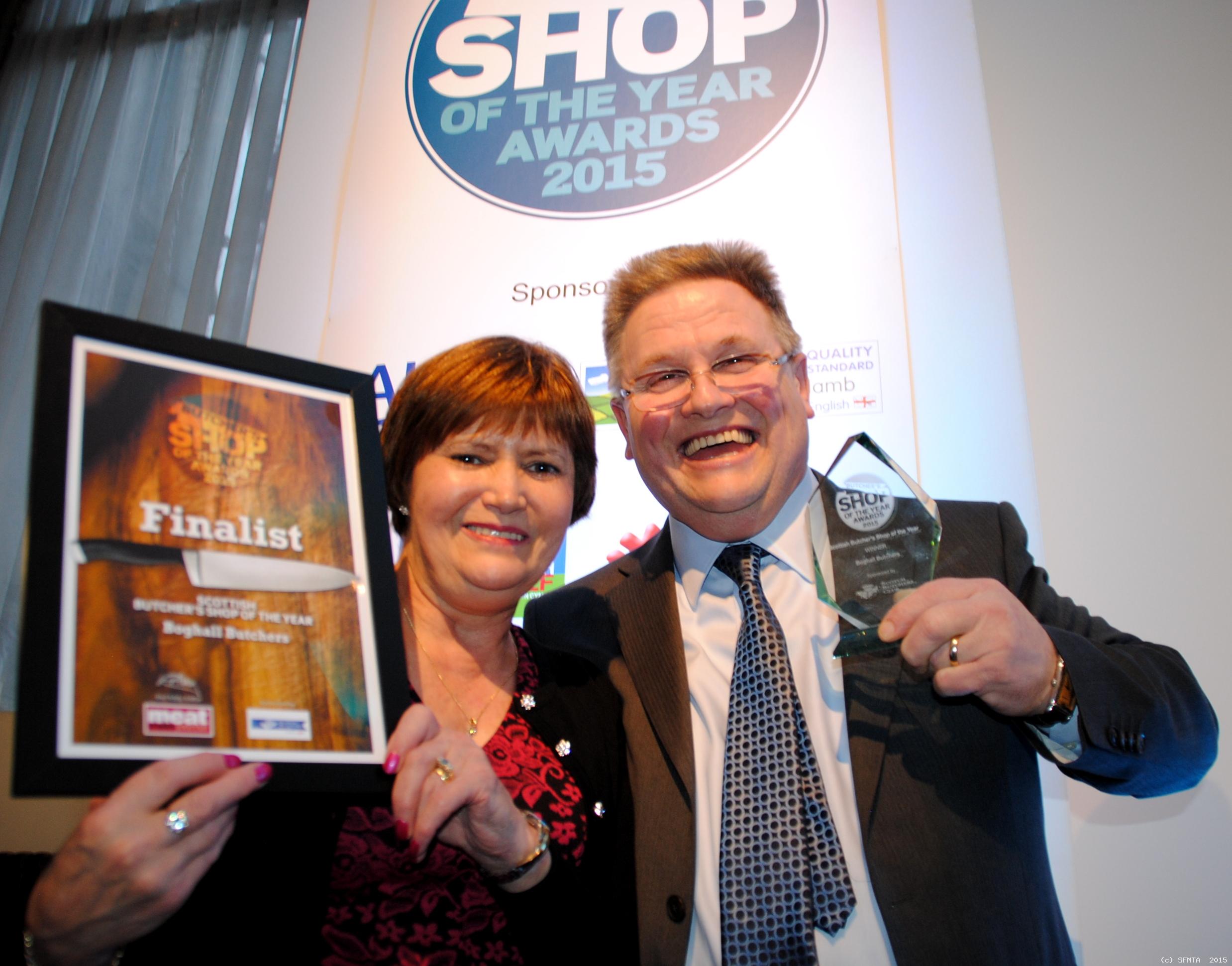 Boghall Butchers are two times World Scotch Pie Champions - 2006 and 2009 - and they have won fistful of titles at the British Pie Awards in Melton Mowbray but Paul felt that this was the pinnacle that he and Christine had so sorely wanted. He continued:-

"When you achieve awards as we have done in the past, we need to keep at the top all off the time but this is the icing on the cake for all the awards that we have won.

"We were up against stiff competition and I know now how John Lawson must have felt last year when he won it. It would have been a proud day for my father because part of John's working life and his training was spent with my father in his shop, so for that to happen again is unbelievable.

"Now we will concentrate on using the title to our advantage and pushing the business forward again."

Other Scottish finalists were Patrick's of Camelon and John Lawson, Uphall.