Every year BPEX (the British Pig Executive) promote British Sausage Week. This year it is from 2nd to 8th November but this is an English promotion body that few Scottish butchers can have access to. SFMTA have therefore stepped in again to give Scottish butchers something to promote around Bonfire Night when sausages can be very popular buys. 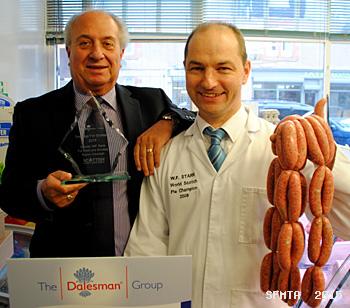 With the help of our corporate members, The Dalesman Group, SFMTA set up a competition to find the best idea. Entries were invited and the judging process started at Perth College back in August establishing five finalists.

These five very different sausages were then served up during the first week in September to butchers at four regional meetings in Glasgow, Elgin, Carfraemill and Perth and at those tastings the butchers voted for their preferences.

The majority of the votes went to the Beef Sausage with Smokey Bacon that was made by Amos Smith of WF Stark, Buckhaven. Amos’s receive a £500 prize from sponsors, Dalesman in exchange for the recipe which is now being made available for Scottish Craft Butchers to make in British Sausage Week.