Selkirk: Address for the Best Haggis
Famous for its grace, Selkirk is now to be just as famous for its Haggis.

The 2011 Haggis Championship was decided in a competition sponsored by Grampian Oat Products held at the Scottish Meat Trade Fair.

Following this year’s Scottish HaggisChampionships, which took place in Perth, the title has been bestowed on Selkirk butcher J & A Waters.who take over the crown from Scott Carson of TH Carson, Dalbeattie who was the runner up this time. 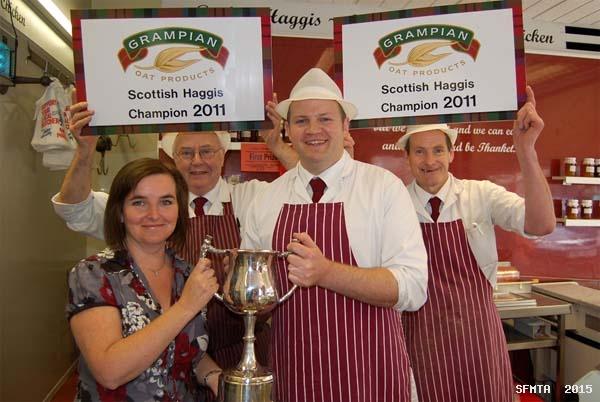 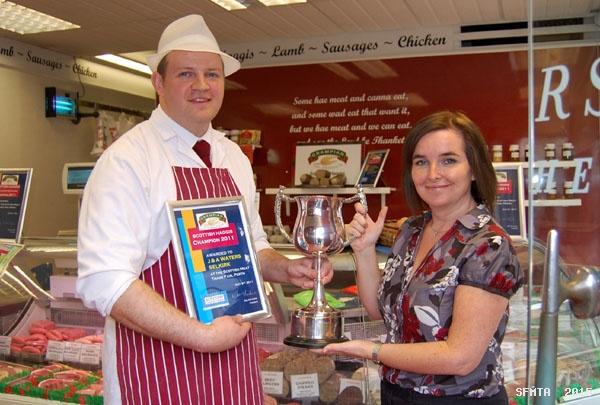 The contest that is held every second year attracted 95 entries which were firstly judged by region, and then the regional champions faced another tasting panel of experts to establish the overall winner. The conclusion was the selection of the Selkirk haggis made by Darren Hoggan of J & A Waters. 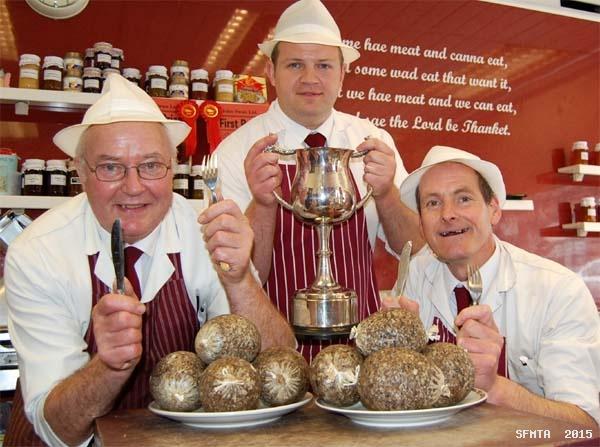 Grampian Oat Products’ Louise Harley (above) presented the prize trophy to Darren Hoggan in the High Street butchers in Selkirk on Tuesday 10th May.
.
The Scottish Haggis Championships were held in the Dewars Centre Perth as part of the Scottish Meat Trade Fair on Sunday 8th May. Darren took over the business just four years ago and just recently changed the recipe to suit his tastes. Sales have since improved and now with this top award he is hoping to further increase his sales.

It takes guts to change a recipe that has generated successful sales over the years so it's possibly just as well that Darren Hoggan had a career in rugby football behind him to shoulder the responsibility. The former captain of Selkirk Rugby Club took over the business of Walter Miller in October 2007 but he eventually took the brave decision to change the recipe.

"I had no problem with my old boss but I had didn't really like his haggis. We sold a lot of haggis and was wary of changing it but after Christmas I decided it's my shop and I want to change it to the way I like it. I thought if I do lose custom then I could always go back"

Alan who works behind the scenes making the meat products worked with Darren to devise a new recipe. Small batches were tried initially and regular customers were given samples to feedback their thoughts. The community effort certainly paid dividends as Darren pointed out:-

"We have three first class butchers in Selkirk but it is nice to know that I have the number one haggis in Scotland."

Darren left Selkirk High School to work in the shop when he was just 15. Fifteen years later when he was in the throws of taking over the business from Walter Miller, Darren broke his leg in his final match for the rugby club and this proved to be a severe handicap . Now however at the age of 33 finds himself the top haggis maker.

Rugby has a hand in everything in the Borders and Darren has resisted changing the trading name of the business - J & A Waters - after all Jack Waters was a former Selkirk captain who was played for the British Lions on the 1938 tour to South Africa.