2011 BUTCHERS SHOP OF THE YEAR

John Davidson first beat off the challenge of Fergusons of Airdrie and Stewart Collins from Muirhead to win the Best Scottish Butchers Shop of the Year and then claimed the top prize ahead of Aubrey Allan of Leamington Spa,
Allens of Mayfair and K & G MacAtamneys of Ballymena.

Davidsons won the Scottish title in 2008 and again in 2010 but this is the first time that he has won the UK title. Congratulations to John, his wife Denise, father Jim and all the staff in Inverurie.

Speaking after the awards ceremony at The Landmark, London, John described the accolade as "the best thing that has ever happened to me" and claimed that it was the bringing together of all that they do right that has brought this about.

"We take traditional butchery and change it. We do a lot of new product development, we add things that others don't and make sure that we meet customers' needs."

The win was inspired by an ambition to emulate Stonehaven butcher Charles McHardy's success in this event almost 20 years ago:-

"I wanted this before I even had a butchers shop. It has been my dream for an awful long time, it is what I've always wanted to do."

"This is the greatest honour that can be bestowed on a butchers shop and John Davidson has been working towards this ever since he took over the Inverurie shop. He works tirelessly to achieve the very best and he is a fantastic example that others would do well to copy.

"His commitment to training with 10 members of staff working towards Modern Apprenticeships is just one of the things that contributes to making Davidsons Specialist Butchers stand out and able to fight off other strong challengers for the title from all over Britain and Ireland.

"This is a fantastic achievement and one that we can all be proud of." 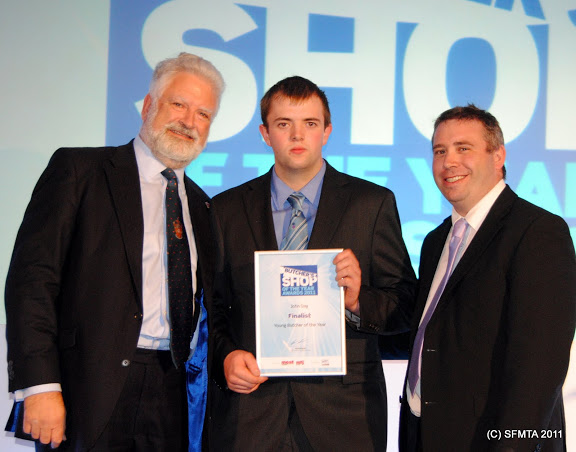 John Day (above) has worked at Tom Courts Quality Foods in the Raith Centre for four years and working with food has been his ambition for a long time. He explained how he has progressed:

”I feel that at the age of 20 I have made great progress, learned a huge amount about the meat industry and developed the skills required to have become an important part of the team at Tom Courts.”

The 20 year old from Dunfermline really loves his job. he prefers boning and manufacturing but has come up with ideas for award winning products.

“I have involved in developing the pork sausage that won the Scottish Pork Sausage Championship this year and my idea of a Naga Sausage won a Silver Award in the Speciality Sausage Evaluation in 2010. I have come up with other ideas like the Volcano Burger and I suggest a list of sausages and burgers every week for my boss to select from.”

John achieved his SVQ Level 2 in Meat & Poultry Processing in September 2008 and is currently working on his Level 3 in Food Manufacture: Specialist Meat and Poultry Skills and his SFMTA Craft Certificate.

Boss, Tom Courts said that John is continually contributing to the continued success of the business:-

“To say that John has made a meteoric rise since joining my company would be an
understatement. He is a natural talent within the vocational learning environment and has seized the opportunity to learn the retail meat trade.

“Within weeks of joining the firm John was responsible for the manufacture of the majority of our sausages, burgers and puddings. He has made this role his own and has created many award winning products. This includes our very successful pork sausages.

“John is the hardest working young person I have ever known. His work ethic belies his age and experience and is such that one only normally sees this level of commitment from a business owner. He is always first on duty, at least one hour before required. When our backs are against the wall, he is the one who will forego his day off to help out. I recall during last winter’s snow storms, I arrived for work at 4 am one day to find John already there clearing snow from the pedestrian precinct outside the shop.”

The judges for the UK Young Butcher of the Year visited John in his shop in October. He impressed them and they noticed how popular and well liked John was by his colleagues and customers alike. He has been well trained in-shop and externally through Scottish Meat Training. Taking the time to learn customers by name and John gives good old fashioned customer service. Tom Courts who travelled to London with John on Wednesday 16th November, added:-

“I cannot praise John highly enough and although he does not as yet hold a management position, this will soon come his way. John can be rightly proud of his achievements, he is a credit to his parents, to my company and to Scottish Meat Training.

He deserves this nomination and I am personally delighted that his efforts have been recognised at the highest level.” 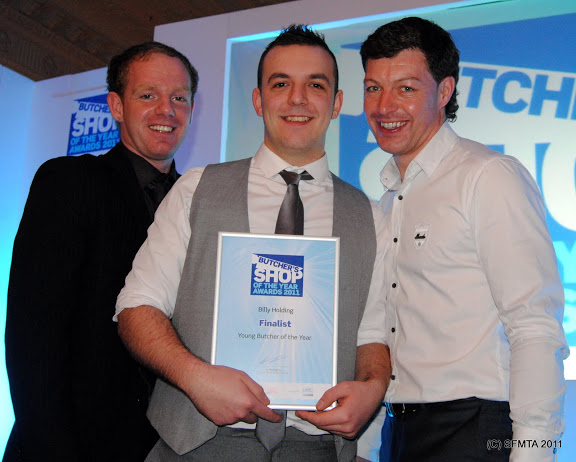 Billy Holding (pictured above with Steven Strachan and Andrew Henderson) has worked at Henderson of Hamilton Ltd in the Newcross Centre for just short of three years and working there has been his ambition for a long time. He explained:-

“From a young age I would come into Henderson ’s with my mum who was a customer in the shop. I remember enjoying the bustling atmosphere but most of all the sound of knifes being sharpened and the noise of the cleaver hitting the block. I started to get to know the butchers in the shop who would explain what part of the carcass they were working on."

Since starting in Hendersons, Billy has developed his skills, completed his SVQ level 2 in Meat and Poultry Processing and is in the process of being assessed by Scottish Meat Training for his Craft Butchers Certificate.

Perth and is already looking forward to getting another chance to compete in that national competition next time around in 2013.

The 21 year old from Burnbank has good people skills and builds good relationships with his customers. He has developed the required good knife and presentation skills and is continually soaking up technical knowledge.

“Billy is a charismatic young man,who is very popular with customers and other members of staff. He is team member that I can rely on and who I would consider for a future management position. The opportunity of a career in the retail meat trade has had a profound life changing effect on this young man’s life.”