Mark (38) trades under the name of W Simpson & Sons in the towns High Street where he started as a sixteen-year-old Youth Training Scheme trainee in 1980.

Learning his craft skills on-the-job under the watchful eye of Walter Simpson, Mark's training
earned him a Federation Diploma in 1984. At the youthful age of 22 Mark, and his wife Lorraine, took over the business in 1986.

Mark is a Past President of the Fife and Kinross Meat Traders Association, and has served as Membership and Development Convenor of the Scottish Federation. Locally he is Vice President of the Leven Business Association, sits on the Leven Environment Group, the Community Safety Panel and is a member of the Community Forum. His focus will now become national rather local.

Away from work and representative duties, the new President's interest is in cycling, he used to play keyboards in three local bands and had to turn down a six week tour of Ireland two months after taking over the business. Mark and Lorraine have two girls: Ashleigh (10), Aimee (5). 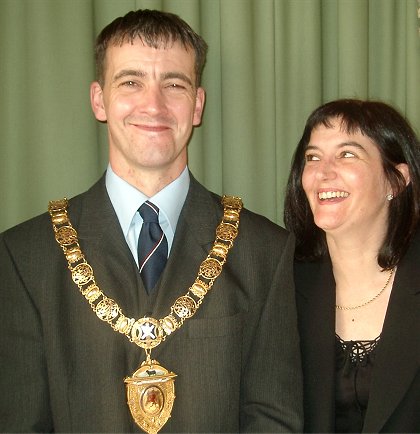 "I like others could never have foreseen the rollercoaster path that the meat industry would travel along. Rollercoasters can be terrifying to some but for others there can be an element of pleasure. I do believe that our rollercoaster retail meat industry, which has been turned upside down and inside out in the last ten years, is now in a position to move forward and reap rewards for years of torment.

"We have seen the retail sales figures bend back towards the independent. We have the assurance, even though it was hard earned, of Butchers Licensing and the general acceptance that the retail butcher is ahead of the rest of the food industry in having HACCP (Hazard Analysis Critical Control Points) in place."

The new President went on to call for a change to licensing procedures: "We all have
achieved the standards that licensing set out, it should now be realised that in the interest of food safety it is time to move on. Just like our HACCP document we need review. Environmental Health officers believe that there is now no need for the annual licensing procedure. I too, believe that there is no need for this yearly license, we get regular food safety inspections, EHOs know our businesses and although every licensed butcher would wish to retain the licence this should be renewable three yearly in my opinion."